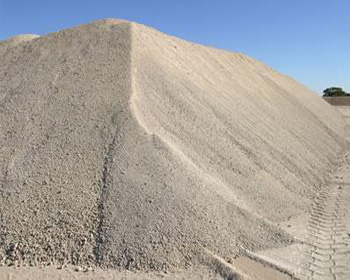 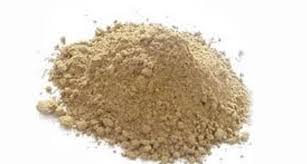 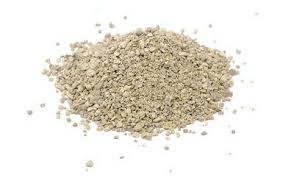 Calcium bentonite is a useful adsorbent of ions in solution, as well as fats and oils. It is the main active ingredient of fuller's earth, probably one of the earliest industrial cleaning agents.

Calcium bentonite may be converted to sodium bentonite (termed sodium beneficiation or sodium activation) to exhibit many of sodium bentonite's properties by an ion exchange process. In common usage, this means adding 5–10% of a soluble sodium salt such as sodium carbonate to wet bentonite, mixing well, and allowing time for the ion exchange to take place and water to remove the exchanged calcium. Some properties, such as viscosity and fluid loss of suspensions, of sodium-beneficiated calcium bentonite (or sodium-activated bentonite) may not be fully equivalent to those of natural sodium bentonite. For example, residual calcium carbonates (formed if exchanged cations are insufficiently removed) may result in inferior performance of the bentonite in geosynthetic liners.

Uses :   The main uses of bentonite are for drilling mud, binder (e.g. foundry-sand bond, iron ore pelletizer), purifier, absorbent (e.g. pet litter), and as a groundwater barrier. As of around 1990, almost half of the US production of bentonite was used for drilling mud.

The ionic surface of bentonite has a useful property in making a sticky coating on sand grains. When a small proportion of finely ground bentonite clay is added to hard sand and wetted, the clay binds the sand particles into a moldable aggregate known as green sand used for making molds in sand casting. Some river deltas naturally deposit just such a blend of clay silt and sand, creating a natural source of excellent molding sand that was critical to ancient metalworking technology. Modern chemical processes to modify the ionic surface of bentonite greatly intensify this stickiness, resulting in remarkably dough-like yet strong casting sand mixes that stand up to molten metal temperatures.

The same effluvial deposition of bentonite clay onto beaches accounts for the variety of plasticity of sand from place to place for building sand castles. Beach sand consisting of only silica and shell grains does not mold well compared to grains coated with bentonite clay. This is why some beaches are much better for building sand castles than others.

The self-stickiness of bentonite allows high-pressure ramming or pressing of the clay in molds to produce hard, refractory shapes, such as model rocket nozzles.